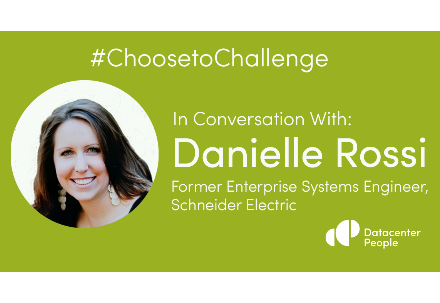 Danielle Rossi is a commercially focussed enterprise system engineer who has spent her career in the mission critical data center industry with APC and then Schneider. Danielle combines experience of data center infrastructure technologies including power, cooling and DCIM, with skills in sales engineering and account management. Danielle had a STEM education, graduating with dual majors in mechanical engineering and science and technology.

We recently spoke to Dana as part of our interview series for International Women's Day, to celebrate women in the data center industry. You can read the main article here.

Danielle, please could you begin by telling me a bit about your career background. How did you get into the industry?

I started right out of college, I went to school for Mechanical Engineering. There were multiple Career Fairs, I was at one when I was approached by APC-MGE who said I’d be a great fit for them. I started out in Tech Support where I learnt about the products and helped support customers. I started with smaller, single phase units, but because of my background in Mechanical Engineering, I then moved to the thermal side to work with cooling products. I was in that role for a couple of years before moving over to the Configuration team. I configured designs for customers, reviewed designs to make sure they were correct.

I then moved over to the Sales side. I went into inside sales, where I supported small and medium business type accounts. I supported multiple people as the engineer and moved over into government sales in the US and worked in an outside role, then moved into enterprise sales in the US. I worked on some accounts globally but with the configuration side, power and cooling, turn key projects, containerised projects. So a whole range.

When you first started, did you notice there was a real lack of women in the industry?

Why do you think there was such a lack of women?

Well, even when I was in college on the engineering programme, the school had other programmes that were trying to increase the amount of women coming to the school. When I was studying there, there was a 5:1 male to female ratio. Now, I’m pretty sure it’s 50/50. So it’s been 15 years for the programme to adjust. Those aren’t necessarily people that are in the engineering field, just those in that school. You still don’t see a lot of women in the STEM field.

The recent hiring trends have made a huge shift and there are a lot more women in the data center industry, but they are usually in marketing or in the channel. In the broader scope, sometimes it’s so the company can say ‘we hire more women’ and there’s still a limited number of women in the technical roles. Although, it is great to go to sales meetings and I’m not the only  female anymore. But, at the same time, I still show up to a customer site and I’m the anomaly.
There is a big push to get women involved with the STEM programme, to attract the younger generation. If there is a lack of women at the beginning, then it sets a precedent going into these jobs.

It must be hard to get a balance, as the industry needs to gain more interest from women, but there must be something that puts women off as it’s so male dominated? There must have been times where you felt undermined by men?

Right, but luckily that’s going away as well. I started in the field at 26. So not only was I young, but I was young and female.

Was it hard to make a name for yourself?

It was difficult. I’m the Engineer and I have a Sales Rep when I go on site. It’s always the Sales Rep that customers turn to first, as they’re usually an older man. They assume I’m the Sale Rep, as opposed to the Engineer. I’m lucky to have worked with a wonderful Account Manager, he would often make a joke saying ‘I’m the beauty and she’s the brains’, which helps to break the ice and let customers know I’m the Engineer they need to speak to. When I first started in the field, I had customers in outside sales who have said they didn’t want to work with me and that they wanted to speak to a man.

It is. The generation that would typically ask that is the same generation who will look at equipment and say ‘I’m not going to use a computer, why do I need a computer?’. Now, everything is done with a computer. That generation is now retiring.

Once customers realise you know what you’re talking about, they have a more respect for you and they want to work with you. I think it’s the initial having to ‘prove yourself’, which turns many women away.

I always think to myself, when I walk into meetings, that I don’t know who I’m going to meet. I could meet someone who is 70, they could have 6 daughters and be totally cool with me. They could be 30 and misogynistic. You have to know that you could go in and that could be something that they have against you. It’s one of those things and a hurdle you have to get through. Saying this, it’s definitely going away and it’s decreased, which is great.

Did you find that hard?

I knew what I was talking about, but if you don’t know your product or the technology – it would be terrifying. As you don’t know what you’re saying and they won’t respect you. It’s about having the confidence in yourself to walk into a meeting and knowing that, although I’m 26, I have the knowledge that’s required. Whereas, it’s a completely different situation to someone who has come right out of college and going straight into the field. Having a little bit of experience and spending time getting to know the product helps. But, part of it is having the right attitude and strength of will.

It does put women off, as they could walk into a different environment and be respected automatically, rather than having to prove themselves.
You’ve been in situations where you’ve proven people wrong and have established yourself in the industry. I think this helps drive the change in attitudes towards women. There are also people who probably want to get into the industry, but hold themselves back because they’re scared of how they’ll be perceived.

It is probably different, depending on the different areas of engineering. With data centers, there’s the same demographic.

What is it that companies can do more of to attract women into the industry?

I think companies need to make people aware of what a data center is, most people have no idea. You can explain it in so many different ways. In general, there aren’t as many women in STEM subjects, that’s the nature of the beast. There are more women in marketing and straight sales without the tech background. But, I think that’s down to education. It’s a huge industry and there needs to be more awareness in order to attract diversity in the industry as a whole.

Especially since the pandemic, everything is online, so data centers are extremely in demand aren’t they?

Yes, data centers have made a huge difference. People don’t realise the broad scope of data centers. In reality, it spans everywhere.

Why do you think women should get into the data center industry? There are a lot of opportunities and the sector is expanding, where can women get involved?

There are so many different job opportunities. I have a friend who was in Management Information Systems who learnt the same products I did and went down the applications engineering path. She is now in product management. There is another woman who I went to college with, we have the same degree but she didn’t want to be in an office and wanted to be out in the field. She is a Field Service Rep and repairs units. There are many different paths you can take.

Do you think there’s any other challenges women face being part of the data center industry?

There are challenges, from obviously the stigma from it. Once you get past it, it’s a normal position, you’re doing the same job as everyone else.

What’s one piece of advice you would give to women wanting to get into the industry?

You walk into a room, they may not want to talk to you initially, but they’ll realise you’re the person they need to be speaking to. That click over is so satisfying and it leaves you a little smug!

In reality, it creates a better relationship. It’s satisfying because you get the customer what they need, you fix their problem but you are also proving to yourself that you know what you’re talking about and that you’re capable.

That must give you the greatest satisfaction?

When someone turns to the Account Manager initially, and then realises you’re the one answering their questions, they start to pivot. From a mental stand point, it can be hard walking into those meetings, it’s worth it though for the turning point. You have to be resilient, as it wouldn’t be worth it if people didn’t have the realisation. It is definitely getting better, but you still feel like you have to prove yourself.

The changes have happened quickly haven’t they?

There’s been a massive change of mindset, it’s been so interesting to watch it change too. Especially over the last 5/6 years, it’s changed massively.

That’s exciting, especially that there’s been such a big change over the last 5 years. It will be interesting to see how much it will change in the next 5 years!

There’s still much more progression to be made. Companies need to do a better job at bringing in more diversity and become more rounded. Everyone has different perspectives and can contribute different things. If you’re the only one, you may sit there and think I’m the ‘token’ woman. However, you won’t feel like that if you know you deserve your position. In that aspect, it’s about having professional self-worth.

There are many hurdles to be a woman in any industry, that affects people’s careers, that aren’t thought about from a male perspective. We live it, so don’t really notice it anymore.

I’ve worked closely with Steve (CEO, DCP), interviewing women for roles. I’ve only interviewed with one woman, of all the places and companies I’ve interviewed with (around 40 people), one woman. She was a director. It’s crazy how I’m used to it, so don’t think about it from a world perspective.

Yes it is. The last company sales meeting I went to, I turned to one of my friends and said who are all these women. I used to be able to count on my hands the number of women in the meetings, and we all knew each other. It’s amazing to see the change and it’s always interesting to reflect looking back.

Thanks Danielle, it was great speaking to you.

Send Us Your CV