In Conversation With: Angela Paterson, Pulsant 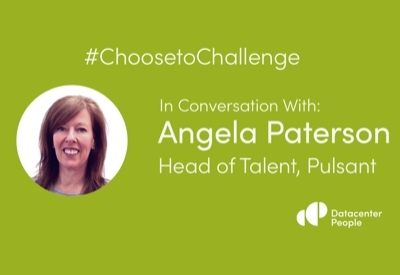 As part of Datacenter People’s #ChoosetoChallenge interview series, this month we speak to Pulsant’s Head of Talent, Angela Paterson.

Angela has a background of delivering high profile in-house talent and talent acquisition programmes in the UK and internationally.

At Pulsant, she is responsible for managing and delivering talent related activities including talent acquisition, coaching, training, culture, EVP, Employer Branding, and D&I.

She is also tasked with skills and career mapping to help further develop and retain staff.

Outside of Pulsant, Angela spends part of her time practicing triathlon, a sport she says everyone should try at least once.

Read the full conversation below.

Angela, thank you for being part of the #ChoosetoChallenge interview series. Could you start by telling us about your journey in the sector?

I've been in HR talent and recruitment related roles for about 20 years' now. I started in the agency side of things, then set up my own business and ran that for a few years. I had a young family at the time and decided that I wanted to be a consultant. I consulted in the oil and gas sector, internationally, looking after talent acquisition for a Houston based company, looking after the Pacific, the Middle East and the UK regions. The downturn of oil and gas led to me reaching into my network and seeing what opportunities could come out of that.

I used to be a client of Pulsant. I contacted them and asked if they needed any consultancy work. Within a few months of working with them, I thought I really like it here and I thought I might like to stay after years of being self-employed.

They put forward a business case to hiring me permanently, and I accepted. That was over four years ago.

How did you feel about operating within such a male dominated industry?

To be honest, I don't really think about it that much. When I have a meeting, for instance, I think more about the objective of the event or meeting and around people’s roles – be it a man or a woman - and what they bring to the table.

I understand that some people might feel differently, but I've personally never felt compromised or in any way patronised by being in the company of males in the business sense.

What changes have you witnessed over the years to that end?

From the women that work in my own organisation, we're all quite strong-minded, determined, professional, and driven. We are women who certainly are not shy about sticking our claim on an opinion or a task.

Do you find that companies are allowing women to express themselves and voice their opinions more than they used to before?

It's a natural process. Within Pulsant, we have a very open culture of communication. And it's quite an empowered culture generally. Our leadership team are very open with us. We have regular comms with them, and we have had women in positions on our executive team. We've never felt that we're being led by a male dominated team necessarily, because there's always been women involved in management and leadership within the organisation.

When you are a leader, and you encourage that, that opens up communication, you're leading by example. Therefore, other people within the organisation feel equally able to communicate freely with their peers across the business.

Why should women come into this industry? What are the opportunities for females in the sector today?

Recruitment is a really big issue. Whilst we're probably on the cusp, as we move into a more competitive data center environment and there is a skill shortage in the space, all data center companies will have to be a little more creative and really think of how we attract talent into the business.

There are real career prospects within our data center roles. There are quite a few examples of people who started either as apprentices or junior engineers and have chosen to stay with the company and have had that sort of structured, and sometimes unstructured, career paths as they've moved on.

We've got a number of people that are also seconded to other parts of the business to give them exposure to that.

As we come out of the Coronavirus pandemic, certainly in the UK, how have you seen the health crisis impacting the sector in terms of gender diversity? And what can companies do more of to ensure we stay on track in the D&I agenda?

I haven't actually seen any impact of Covid on women. If anything, I've seen more of an impact on men. The whole world has changed in terms of how we operate and how we manage working from home. What working from home did was almost neutralise the male/female role at home.

My observation is that a lot of the men previously came to work in the office and their wives or partners took the brunt of childcare arrangements. Working from home levelled that.

A lot of them are certainly demonstrating the need to be much more organised, juggle and work around their childcare commitments. There has been an increase in how men have had to approach childcare as a result.

I haven't heard that before. Thank you for raising that good point. In the end, Covid kind of helps with the push for equality.

They have taken on more responsibility at home. And although the balance has changed a little as Covid has come down, some of those sharing of tasks principles have sustained themselves.

Looking now more into Pulsant, what has the business done to create a more diverse and inclusive work environment and company?

It's my personal goal this year - well, when I say my personal, it is also the company’s goal - to really drill down deeply into all the diversity aspects of our existing and potential workforce and make sure that we've got a plan that reflects the best way of attracting and maintaining talent in the business.

We've got a strong team of women who network extensively, both in generic and networking groups, and female orientated groups. They are really keen to spread the word of how empowered they feel in the sector, how varied working in the data center space can be.

I know that all women within Pulsant would highly recommend working in our space.

Do you think a lot of companies are still hiring women and other less represented groups as a ticking box exercise versus actual doing it because it's the right thing to do?

A lot of large corporates probably fall into the trap of box ticking. And I mean that not necessarily from a gender perspective, but from all aspects of diversity. Sometimes they want to be seen to be doing something that ticks a box.

That said, certainly from my own personal experiences in my career, the teams I've worked with have been more focused on just ensuring that we do the right things to attract talent in different ways.

It's a known fact that women will respond to certain media more than others. For example, a woman is quite more likely to see something on social media and that will catch their attention first, as opposed to a job board. Whereas men tend to be less engaged with adverts on social media for jobs.

Women will be more attracted to cultural aspects of a job advert, as opposed to a man who will look at that, and I'm totally generalising here. Women are much more overtly interested in the culture and wellbeing of an organisation and want to feel part of something.

When women read those job adverts, are they prone to risk sending their CV or is it a different process?

I am generalising again, but I think that women will, certainly in the past, and I hope this changes, look at a job advert and will only really apply if they feel they can do everything on that job description, whereas men don't read it as much in detail. They will look at it and if they can do 50% of what's on the job description, they tend to apply anyway.

I certainly would say to any women looking to get into any role, whether it's directly technical or not within the data center space, to make that aspirational job application. Because most people that are reading them would be very welcoming of that and quite used to it to be fair.

Finally, Angela, what advice have you got for other women based on our conversation so far?

I'd love for this to make a difference to women thinking about getting into the data center sector or any technical role. Men and women can equally be confident or lack in confidence. I don't think that there's really a difference. Men are all human beings, have reservations about their own capability. The difference between men and women can be that men will feel the lack of confidence, but they'll take the forward step anyway. Whereas women will feel the lack of confidence and they may or may not take that bold step.

I have been doing triathlon competitively for maybe 12 years and quite at a high level. And I would say that the number of women I have persuaded to take up or do their first triathlon is quite high, because they've always wanted to, but they didn't feel that they could. They felt fear; they thought “Will I fail? Will I be embarrassed? Will I make a fool of myself? Do I have the capability?”.

All these fears and barriers were holding them back. And the men would have similar fears, but they would just have taken that one little ounce of confidence that would make them do it anyway.

If you apply that to a job application, most people that get into the data center sector, they quite often, particularly if it's early-stage career, they haven't gone to university or college to learn how to be a data center services engineer. They probably have a broad sort of grounding in the sector.

What we need to do to get more women into the sector is encourage them to think that even though they don't have all of this , we still want to embrace them and bring them into the organisation.

Thank you, Angela for a great interview!

Please agree to the conditions first.

By connecting your social account, you are agreeing to our